A fight is brewing after federal gun regulators issued a Cease & Desist order to Q, LLC for its popular Honey Badger pistol.
The New Hampshire-based firearms company posted the Aug. 3 letter from the Bureau of Alcohol, Tobacco, Firearms and Explosives advising that the Q Honey Badger pistol in its current configuration is a short-barreled rifle regulated under the National Firearms Act, thus making otherwise legal owners of such unregistered devices subject to potential felony charges and the company on the hook for retroactive NFA taxes. Chambered in .300 Blackout, the gas-operated HBP has a 7-inch barrel and a proprietary pistol stabilizing brace made by SB Tactical.
"In response, Q has ceased all production of the Honey Badger Pistol, and submitted a comprehensive letter to ATF and the Department of Justice (“DOJ”) stating why we disagree with this classification," said the company in an open communication.
The seven-page response from Q's attorneys to ATF contends the agency's letter was procedurally deficient and not based on any publicly-available standards while proposing possible solutions. 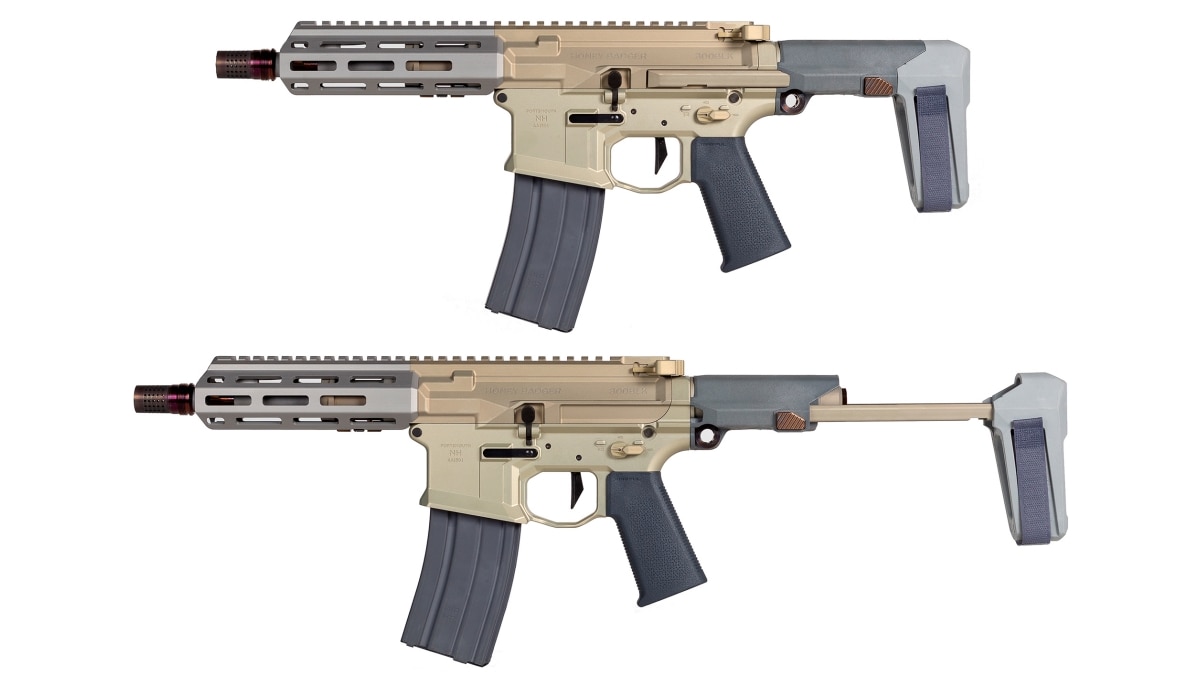 The Q Honey Badger Pistol (Photos: Q)
In addition, the ATF is asking Q to submit examples of their Sugar Weasel and Mini Fix firearms, which also have pistol stabilizing braces, for review, saying, “Based on the product description on your website, ATF believes these firearms are designed and intended to be fired from the shoulder and may be classified as a short-barreled rifle under the GCA and NFA."
Reaction from 2A Groups

With the ATF's opening salvo on pistol braces having implications potentially affecting millions of legal gun owners who have such items, at least two national pro-gun groups have jumped to Q's defense. The National Rifle Association posted an urgent call to action to its members to contact their legislators and the Department of Justice to apply pressure on the ATF to reverse its new determination.
"Rather than create a clear set of rules that law-abiding gun owners and manufactures can follow, ATF seems to be taking a 'I’ll know it when I see it' approach to classifying firearms," noted NRA. "This arbitrary approach is clearly inconsistent with the right to keep and bear arms and due process of law. By blurring the lines on legal definitions that carry serious criminal consequences, ATF is putting law-abiding gun owners, the firearm industry, and law enforcement in the impossible position of attempting to read the minds of ATF bureaucrats when complying with or applying federal law."
In addition, the Firearms Policy Coalition issued a similar public appeal, saying, "ATF has once again unlawfully and unconstitutionally exceeded its authority and changed the law by issuing a new determination that is devoid of logic and reason, contains no explanation as to the manner in which it arrived at its conclusion, conflicts with its prior determinations, and embodies the very essence of 'arbitrary and capricious.'"
Legislative awareness

As previously reported by Guns.com, in June, a group of Republicans in Congress warned the ATF not to get too handsy with changing current determinations on pistol braces, which have been increasingly popular across the country. A letter penned by Rep. Matt Gaetz, R-Fla, and co-signed by six other lawmakers called out Attorney General William Barr and ATF Acting Director Regina Lombardo for crafting “secret rules” restricting the possession of certain pistol braces.
While it was not clear what kind of pistol brace would potentially be affected, the lawmakers touched on the Bureau’s past flip flops on pistol braces since 2012, ask what criteria the agency is using to determine if a firearm is designed to be fired from the shoulder, and how many arm braces have been sent to the ATF for evaluation by other law enforcement agencies for criminal prosecution.
Gaetz and three fellow Congressmen followed up with a second letter last week after receiving no response.
 
"We again request that ATF immediately cease abusing its enforcement authority by threatening law-abiding small business owners and the now estimated 3-4 million Americans who own firearms equipped with arm braces," wrote Gaetz
What Now? 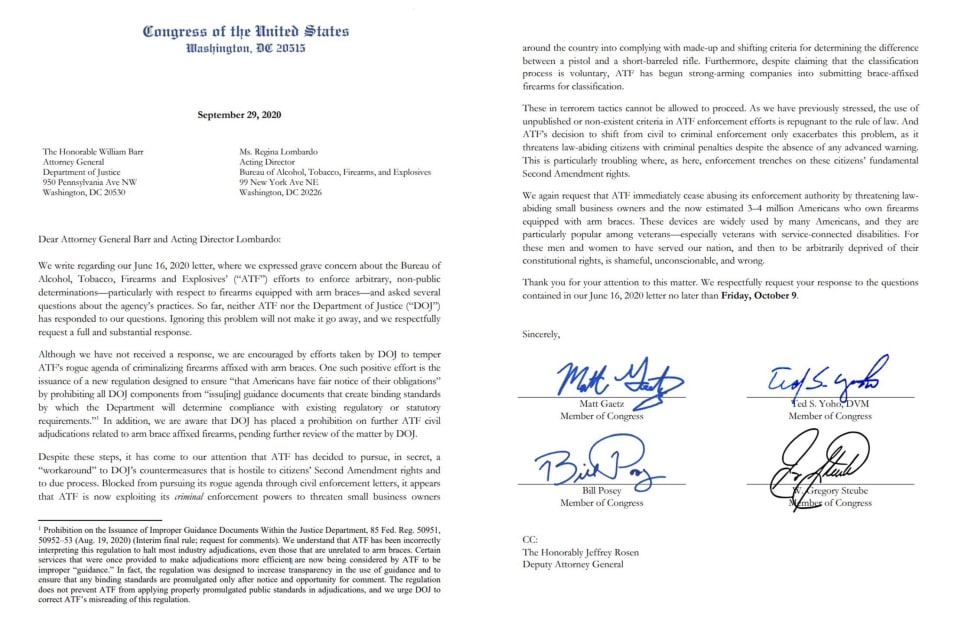